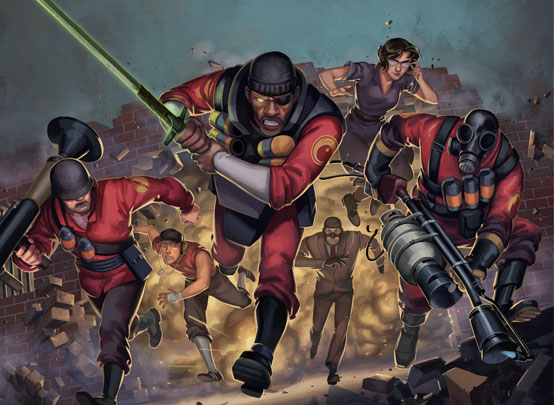 We've been busy these last few months, trying to settle a longstanding debate as to what "bimonthly" actually means. Some members of the team are convinced it means "once every two months." Others maintain even trying to define it would ruin the enchanting mystery of reading. Anyway, three months later we're no closer to an answer. However, we are close to releasing the second issue of Team Fortress Comics, this time as a tri-monthly publication. How close? It's here.

When we last left our gripping ongoing tale, Saxton Hale had lost Mann Co. to the scheming Gray Mann and disappeared to parts unknown. The TF2 mercs, now out of jobs, had scattered to the winds—until six months later, when Miss Pauling started reassembling the team under orders from an in-hiding Administrator. With Demo, Soldier and Pyro on board, our team heads to Teufort to rescue Spy and Scout from the hangman's noose. Find out what happens next in Part Two, titled "Unhappy Returns".