Friendship ends in one day. 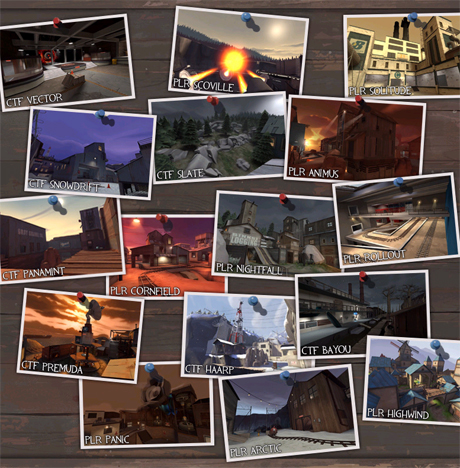 What happens when you give some TF2 mappers six months to make a map? What happens if that map is payload race or a resurrected Team Fortress Classic game mode, Attack/Defend CTF? TF2maps.net decided to find out. Take 'em for a spin and place your votes!

Looking for a spot to practice your moves without getting fragged to oblivion? Check out tr_walkway, a super-handy bot-spawning training map you can use to teach yourself, or just brush up on, a wide selection of TF2 offensive and defensive fighting techniques.

The European Team Fortress 2 League turned two recently. In their own words:


Congratulations on the anniversary, guys!


This Mailbox Just Got Dominated by Saxton Hale

Those of you who sent in money along with a coupon cut from Gentleman Scoundrel Magazine from our Sniper vs. Spy update recently received a handsome collection of postcards from Valve's other resident Australian strongman, Saxton Hale.

The money you sent has been donated to gamer charity Child's Play. Our legal department wants us to remind you that, in the future, please do not send us money (no matter what it says in the fake fictional advertisement). A friendly letter is enough to get potential free stuff sent your way. 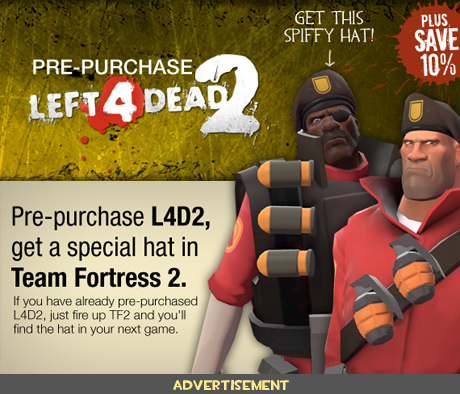 The good news is that yesterday's $2.50 sale saved the company. The bad news for our bean counters is that, as a "thank you" from all of us on the TF team, we're rolling back prices like it's Thursday. That's right — Team Fortress 2 is BACK ON SALE at its original, company-busting Thursday Super Sale of the Century price of just $2.49! But only until 1:00pm PDT! And this is the last time we're doing this! There will be no more sales!

"Gee," you may be thinking, "the first time it was on sale, I bought a copy for myself. Then, when it went on sale a second time, I bought some more copies to give to my friends and family. Sooo... Ummm... I guess I don't know what to do."

Well, sure, you bought a copy for yourself. You bought copies for your friends. But ask yourself this: Have I bought enough copies... for my enemies?

Sounds crazy, right? You know what else sounded crazy? Using only words to recreate the feeling of when something unexpected happens in a movie trailer and all of a sudden there's a loud record scratch. People told us that would never work, but - as you probably remember from the previous paragraph - it totally did work. You know what sounded even crazier than that? Selling the greatest team-based multiplayer shooter ever made for two dollars and forty nine cents. And that turned out pretty well, too.

Remember yesterday when Team Fortress 2 was on sale for the ridiculous, mathematically-basically-zero price of $2.49? According to the bean counters, we're now broke. Man, what were we thinking? Anyway, in a desperate attempt to move some units, make up the shortfall, and save the company, TEAM FORTRESS 2 IS ON SALE FOR $2.50 UNTIL 7PM PDT! Pennies from Heaven!

"Gee," you may be thinking, "I already bought a copy."

Well, sure, but did you buy extra copies to give away as holiday gifts? Because - thanks to Steam's gifting system - you totally can.

Here's the best part: You can buy a bunch of copies now for $2.50, then when your grandparents unwrap them on Christmas morning, TF2 will be selling for $19.99 again. They'll think you spent almost 700% more than you actually did! It's like you're stealing from us and lying to your grandparents! It's the perfect crime!

And because we're so crazy, for all we know, by the time December rolls around, we might be selling Team Fortress 2 for six hundred bucks. Or more! Who knows? OH MY GOD GO BUY SOME PRESENTS!