The National Heavy Boxing League has released their Season 8 Highlights! Watch your favorite boxers and get ready for the playoffs!

The 8th Sasha Heavyweight Championship is scheduled for Saturday, June 29th @ 6pm EST | 5pm CST. Be sure to watch it on their Twitch channel! 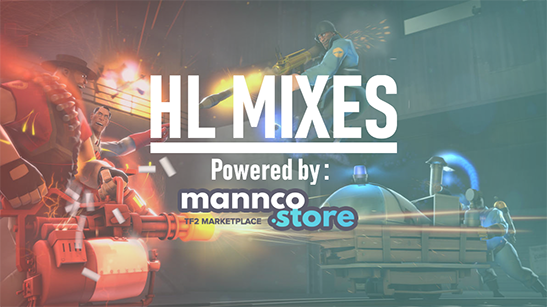 They've got a prize pool of $100 and in-game medals for every participant! If you're interested in joining the league, you can register through their match.tf page. Join the discord to find a team to join or jump straight in by being put right into one of their solo-que teams!

If you have any questions, feel free to reach out to their staff through their discord's help section. 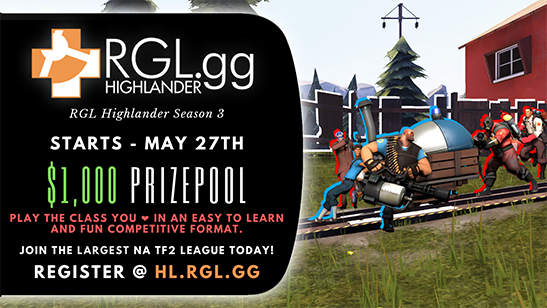 What better way to deal with the summer heat than getting some cool frags on the TF2 battlefield?! The third season of the $1,000 RGL Highlander league is here. Join the largest single competitive league in North America today! Highlander is a format of 9v9 playing on your favorite map types: Payload and KOTH. Class limit is one, meaning that every class will be on the battlefield at all times.

They have divisions for every skill level! It doesn't matter if it's your first season or your 20th. There is a division for players of your experience. RGL is about promoting a healthy community. This is done through taking a strong stance against toxicity and against players smurfing in lower divisions. They try to create a fun and fair environment for players to enjoy themselves against competition of their skill level.

The season starts on Monday, May 27th. All divisions outside of the highest one are free to play.

You can post in the website's Looking For Team (LFT) section and in their discord #LFT channel.

You can also contact the leaders of teams who need players. You'll find them listed in the Teams Looking for Players (LFP) section of the website and in the LFP section of their discord #LFP channel. 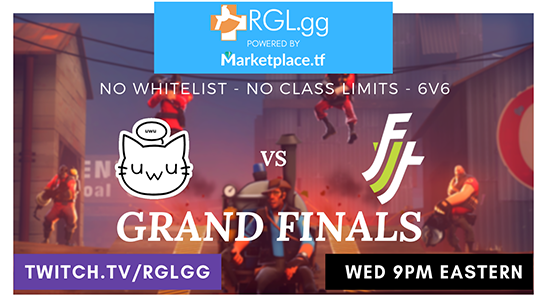 The RGL.gg No Restriction Sixes Grand Finals is finally here! It's a format where there are no weapons banned and no class restrictions. There have been a lot of unique strategies happening over the regular season, but what have these teams been holding back for the Grand Finals?

Don't miss out on the live action! The match starts at 9pm Eastern this Wednesday, April 24th. They'll be playing on koth_viaduct, pl_borneo and cp_gullywash. With almost every major map type being played, teams will have to adapt their strategies for each map.

Follow RGL.gg on their Twitch at twitch.tv/RGLgg to get notified when the match goes live. 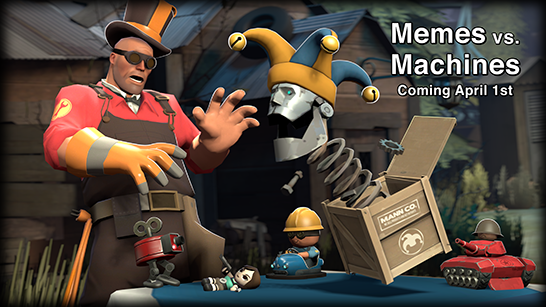 You think you've seen it all, haven't you? An endless sea of tanks accompanied by merciless automatons? Well think again, buster! Operation Memes vs Machines is here with the kind of tour that will knock your footwear AND socks off! Get ready for the most baffling battle of your life!

From the same team who brought you Operation Titanium Tank and Operation Canteen Crasher comes a silly, 7-day April Fools tour filled with nonsensical mischief. Rumor has it that the Robot Menace is under the weather due to a virus scrambling their programming. Now they're attacking us with lame internet jokes, and it's YOUR job to knock some sense into their metallic tin heads!

Gather yourself a team of fools to take on an army of fools in a grand spectacle of tomfoolery! Witness an intermediate-difficulty tour with different surprises and earn yourself a lovely little potato badge for your troubles! Starting on April 1st at midnight PDT, the tour will be available to play here. But don't delay, because while the tour is very tongue-in-cheek, it only lasts one week!

This event is open to players of all skill levels. Official servers will be available in Asia, Australia, Europe, and North America. Click here for more information!

Ever wanted to get into competitive TF2? Now's your chance! The European Team Fortress 2 League is running the Fresh Meat Challenge #2!

This competition is aimed at new, inexperienced players interested in playing competitive TF2. So if you're fresh meat, sign up before April 6th to compete! Every team can play with an experienced mentor to help them understand meta and play their best! Visit the ETF2L website for more info. 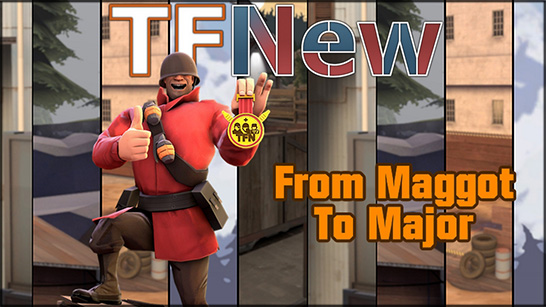 TFNew is an EU tournament and mentoring program for players new to competitive TF2 (maximum 2 seasons of experience, and nowhere above Open level). You do not need to have a team to play, simply sign up on your own (or with 1 buddy, if you'd rather learn with someone you already know) and you will be put onto a team of 6 main players plus potentially some substitutes.

For the next 2 weeks after you've been put on a team, you will practice with them and receive mentoring from your team's assigned coaches at prearranged times. On the weekend of March 8th-10th, teams will go into a group stage and then a double elimination playoff bracket to see which team will come out on top! Some matches may also be casted!

The goal of the cup is for players to learn the ropes of competitive TF2 while playing in a tournament with other newbies and learning from their coaches in a low-pressure environment, but there are rewards for just participating! Playing will earn you an in-game medal cosmetic as well as raffle entries into a giveaway of TF2 items!

Registration closes on February 22nd and for this cup the number of teams will be limited to 8, so make sure to sign up sooner rather than later!

If you'd like to participate, join the Discord server to find more info on the cup in the #announcements and #cup-dates channels. More general info and rules can also be found in the #rules and #faq channels. 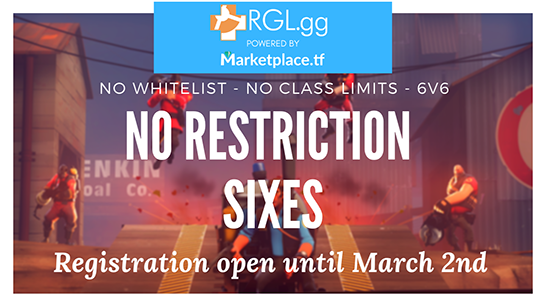 RGL.gg, powered by MarketPlace.tf, is launching a brand new pilot league that is following the rules of Match Making: All weapons allowed, no class restrictions and it's six on six. The map pool will consist of Payload, Five Control Point and King of the Hill maps.

You bring your crazy class combo's to win and we'll bring the prizes!

Every team that enters has a chance to take part in our bounty system. Teams can win up to 18 keys! We will also have a prize pool likely to exceed $1,200 dollars for our Invite division. You can read more details on the prizes in this article.

If you're interested in joining the league, you can register through our league's website (MM.RGL.gg). You should also join the RGL discord where you can find teams to join and play in our in-house Pickup Games.

If you have any questions, feel free to reach out to our staff through our discord. 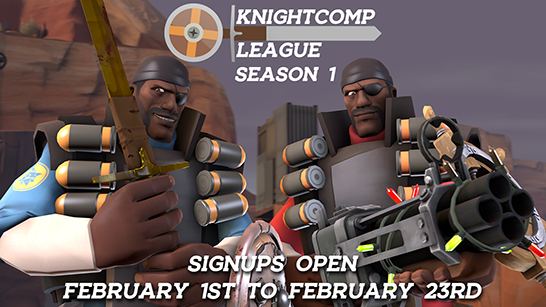 KnightComp is a new competitive game mode designed to give Demoknight players a share of the competitive action! Season 1 of KnightComp will serve as the means to determine who the best team of Demoknights truly is.

If your Eyelander keeps whispering at you to collect some heads, this is the best opportunity for you to do so. Maybe even steal some from an opposing Demoknight?

If you have any questions about the rules or anything else, check out the KnightComp Steam Guide for more information. Alternatively, you can ask the admins on the support channel in Discord if you still can't find your answer.

LuckyLukeTF2 is back with the Top 12 special for 2018! Just like previous years, this edition features all the #1 comp TF2 plays of the month for the year of 2018! Check out the action above or on LuckyLukeTF2's YouTube channel here! 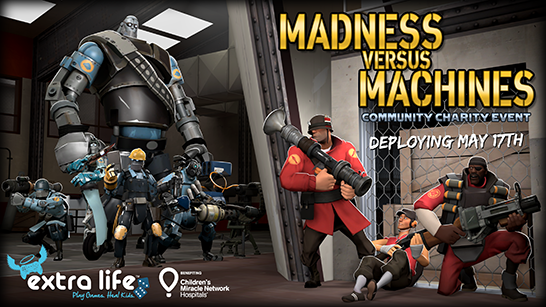 Operation Madness vs Machines is a brand new community co-op Mann vs Machine charity event brought to you by the same group that created Operation Titanium Tank and Operation Canteen Crasher!

Operation Madness vs Machines will take place on May 17th, 2019. Work closely with other players to complete the community-created contracts! Earn in-game medals for playing community Mann vs Machine maps and missions!

This charity contest is now accepting new or work-in-progress community Mann vs Machine maps and missions to be showcased on their servers during the event. The deadline for all submissions is May 15th, 2019. Click here for details.

Donations are already open for this event! You can donate money on their Extra Life page or TF2 items on ScrapTF. All donations of $10 (USD) or more will earn an in-game donor medal. Reaching the $10,000 fundraising goal will award all donors an additional special co-op donor medal! Click here for donation instructions.

All players, donors, and creators can earn up to eight (8) in-game medals. Click here for more details. 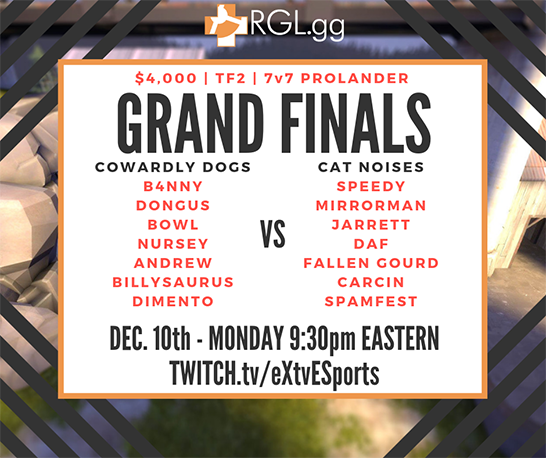 On Monday, December 10th, at 9:30pm EST, come and experience the most competitive RGL.gg 7v7 Prolander Grand Finals to date! Over two months ago six teams set out on a quest for the crown, but from the start there were two clear front runners: Cat Noises, the longest running team in RGL Prolander history, and The Cowardly Dogs, who had some notable pickups this season of b4nny on Scout and Nursey on Medic.

Now these teams will meet on the biggest stage of them all, with a $4,000 total prizepool up for grabs--this is definitely a match you do not want to miss out on! Watch it this Monday at twitch.tv/eXtvESports.

On the 15th and 16th of December from 1:00 - 5:00 pm EST, TFConnect is hosting a Highlander tournament to raise money for SpecialEffect! During the event, they'll also have item giveaways and a live game night with the community!

The event will be streamed live on Byte's Twitch channel, and donations to SpecialEffect will be received through their Justgiving page. Get more information here! 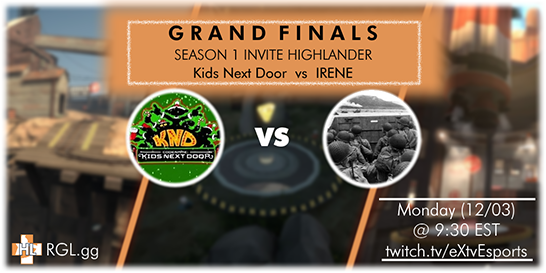 It has been almost half a decade since NA Highlander has seen a prize pool in a competitive league. This changes with RGL.gg HL's first season and the Grand Finals clash taking place on the 3rd of December to decide which team will take home part of the $1,380 prize pool.

On Monday at 9:30 PM EST, the longtime legends Kids Next Door will face off against b4nny and the rest of the powerhouse team IRENE in a best of 3 map series on Upward, Cascade, and Steel.

Tune into this match cast on https://www.twitch.tv/extvesports as the top two North American Highlander teams lay it all on the line for a chance at that sweet, sweet cash. With big names like Kresnik, Nursey, habib, and bo4r, it's not a match you'll want to miss! 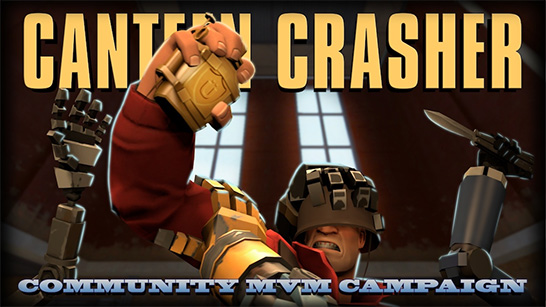 Operation Canteen Crasher is a new community Mann vs. Machine event brought you by the same group that hosted Operation Titanium Tank!

This community-created event features 28 maps with 50 missions and new shiny medals! Complete the campaign and take home up to 5 in-game Canteen Crasher participant medals! Official servers are available in the USA, Europe, Asia, and Australia. Private servers are available for free for groups that wish to play together.

Just sign your name here, ignore the fine print, and go gun down some robots!