TF2 Action Figures Are Out Now! 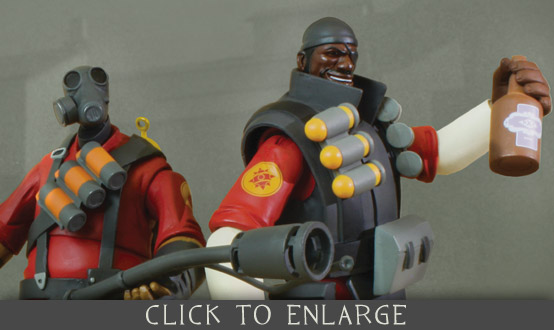 Hey, Scout superfans! Scout here. Some doll-makin' company called NECA told us they were gonna make action figures based on the best, most popular team member in TF2. Well, I just opened the box they sent us, and not to tell NECA their business, but MAN these two dolls do not look anything like me.

Don't get me wrong, logically they GOTTA be ME. Right? I just dunno why they didn't start with my traditional outfit, or at the very least Scuba Scout or Kung Fu Fortress Scout or whatever. I guess they're tryin' the most obscure variants first to whet your appetite for the good ol' Classic version.

Still, the way I see it, Chubby Firefighter Scout and for some reason One-Eyed Black Scout are better than no Scout at all. So be sure to hit up your favorite retail establishments (Toys 'R' Us, FYE and Hastings) or online (Amazon and the Valve Store) because these odd-lookin' Scout dolls are gonna sell like odd-lookin' hotcakes.