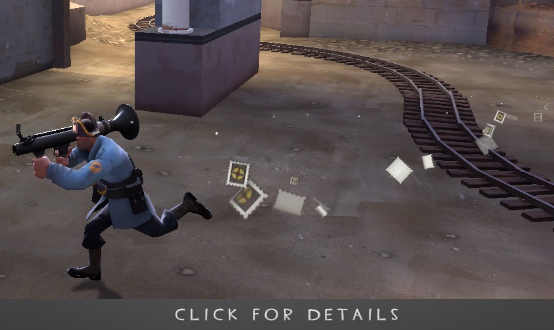 Though we think we’ve done a good job rewarding community contributors who make cosmetics and weapons, we could definitely do more for TF’s diligent, underappreciated map makers. With that in mind, we’re trying two new approaches to the problem.

After taunting in a community map that you’ve contributed to, you now leave behind a trail of large stamps. The more you contribute, the longer the trail!

We’re now also tracking hours played in each map. In the “Maps” section of the in-game Mann Co. Store, you can see how many hours you’ve played each community map and how many times you’ve contributed to it. Plus, occasionally, on check out, you’ll be gently reminded that it might be nice to add a stamp to your cart for a map that you’ve played frequently but haven’t contributed much to. After you’ve seen this reminder once, you can have it show other map stamp suggestions by checking the “Support Community Map Mapers” box near the “check out” button.

Sold in the store, these new filters let you set your strange weapons to only track events on specific community maps. For instance, if you only care about kills on “Yukon”, you can change the filter on your shotgun to just capture that. When filtering stats for a weapon, you’ll also get a custom rank modifier. So, in the aforementioned “Yukon” example, you’d now have a “Strange Canadian Shotgun”. The goal is to give players who really like specific community maps a way to both track their stats on those maps and broadcast their interest even when they’re playing on other levels.

Note that in both cases, 100% of the revenue (minus net taxes) goes to the contributor, so let’s get out there and support our map makers!