I Can't Taunt Without My Radio 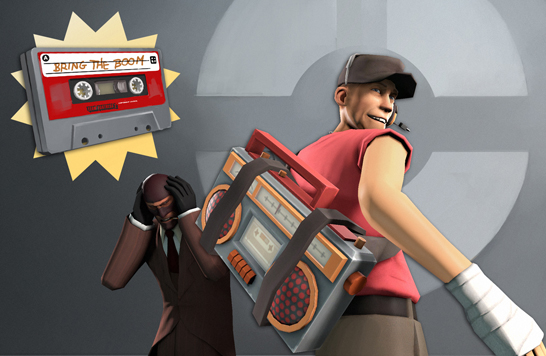 My radio's bad from the Boulevard.
I'm a hip-hop gangster and my name is Todd.
Terrorising my neighbours with the heavy bass.
I keep the suckas in fear by the look on my face.
-LL Cool J, 1985

Most people only know LL Cool J as a rapper, actor, fashion designer, record producer, and author. Now, though, you can add "spooky-ass Nostradamus" to that list, because we've just released a misc slot item for the Scout called "The Boston Boom Bringer" that pretty much exactly matches the lyrics LL penned almost thirty years ago. Is it a radio? Yes! Is it "bad"? Yes! When you taunt while it's equipped, will it play music to terrorize your neighbors and scare suckas? Yes! Are you a hip-hop gangster named Todd? That's gonna vary from person to person, obviously, but it's not totally out of the question! The point is, there's probably an LL Cool J song that predicts your death. The secondary point is everything we just said about the sweet new boom box item.

We went through LL Cool J’s back catalog looking for other prescient rap songs that described musical items available for the other eight classes, but apparently one of the Ls stands for “lazy”, because it doesn’t look like he wrote any. So just in case anyone out there wants to succeed where LL Cool J failed, we've added a special "Sound Device" category to both the in-game item submission UI and in the Workshop so that you can tag your sound-themed submissions. Make something good enough and it may join the ranks of Aladdin’s Private Reserve, The Conquistador, and the Lucky Shot, all great community-made items we’ve shipped this year that were mentioned by name on rap oracle LL Cool J's 1987 album "Bigger and Deffer".