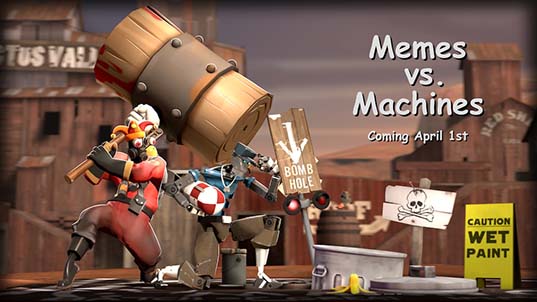 After years of being foiled by the same nine mercenaries, the robot army has returned with a slightly different approach. They've exchanged their ruthlessness for an obsession with ridiculous and terrible humor! Potato's Custom MvM returns with a second April Fools event, Operation Mashed Mediocrity!

This 2 week event lets you face absurd robots with baffling weaponry. Seven new missions across six community maps are available to play. You may even find an old potato you can affix to your shirt with pride!

This event runs until April 13th and is open to players of all skill levels. The tour is available to play here. The Madness vs Machines charity is still open and donating $10 will earn you a special heart gem medal!

After April 13th, the servers will return to your regularly scheduled programming, Operation Madness vs. Machines, which will end in a month!