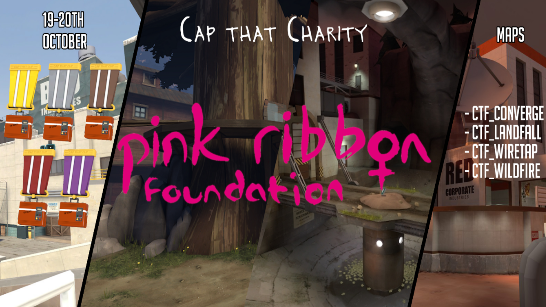 Tell Scout to bring his best running shoes and Engineer to get out of his favorite chair because it's time for another season of Cap That Cup!

CTC is a competitive league that uses CTF as a competitive format. After a successful first season they're back with new rules, new maps, new settings and a brand new charity twist for all the philanthropic people who feel bad about always taking other people's stuff!

You can sign-up here. As for the cup itself:

For more information, interaction, news, or questions you can visit their Discord server.

The charity being supported is the Pink Ribbon Foundation. An in-game medal will be given to anyone who donates €5 or more and adds their SteamID to their donation message. The charity page can be found here and will be active from the 14th to the 28th of October.

Happy plundering to all!