Meet Your Match Update Day 2: All Out War! 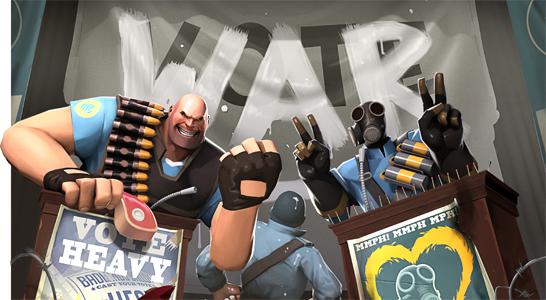 It's the return of the afterburn! Introducing the Flash Fryer, the Pyre of Wild Fire! The Napoleon of Napalm, the Arsonist Assassin! The Sultan of Scorch, the Talent with the Torch! Deranged at close range, the white-hot knight to ignite the fight! PYRO!

And in the other corner... The Defiant Giant! The Beast From the East! The Towering Hulk with Overpowering Bulk! He's a Communist maniFISTo, the Red Son with the One-Ton Minigun! HEAVY!

Two men enter! One man leaves! Followed shortly after by the other man, also leaving!

But! Even though both of those men will be allowed to leave, and both will be unharmed, and there will have been no real consequences as a result of them entering, and they may actually go on to be dear friends, only one of them will get a future Class Update!

But! Okay, both of them might get new Class Updates at some point. In fact, it's highly likely they both will.

But! Only one of them will get it first. Click here to find out how to make your vote count in the biggest election of the year, the epic showdown of The Maestro of Maim versus the The Thrower of Flame! Heavy versus Pyro!

Oh, and new taunts, new crates, a whole crapload of game balances and a bunch of other stuff.

Plus, now you can celebrate your anticipatory pre-victory (or pre-commemorate your assumed defeat) with official Meet Your Match merch!