Ya appear to have trodden on a mine!

The news you've all been waiting for: The Scout Update!

Also, we released an update yesterday with a change that needs some clarification. The update notes said this:


From the response we got, there's some confusion around this, so we thought it'd be good to do a post that explained what's going on here.

In TF2, almost all damage done to players is modified based on the distance from the player to the enemy who did the damage. There are several reasons why this is done, but the general purpose of it is that it makes close combat resolve faster than long range combat, giving approaching players more time to make tactical decisions (like whether to engage or retreat). The ramp centers around the 512 units (roughly 40 feet) range, and linearly remaps damage done from 150% at 0 units down to 50% at >1024 units. So if you're fighting someone closer than 512 units, you're doing extra damage.

Sticky bombs have an additional complexity on top of this: they use the distance modification for the first 5 seconds of their life, and then turn it off. This is because it's generally a dual purpose weapon: used offensively like a rocket launcher, and defensively to create traps. The 5 second rule essentially means distance matters in the offensive mode, but not at all in the defensive. So if you're a trap laying Demoman, you don't need to get near the stickies when you set them off.

So, yesterdays update reduced the amount of bonus damage that the stickies earned at close range during that first 5 seconds of their life. Their old distance-based damage ramp range was 150% -> 50% variance around the base 120 damage, and the update reduced that to 115% -> 50%. Here's a handy graph with the details, and it shows how the remap only affects damage closer than 512 units. 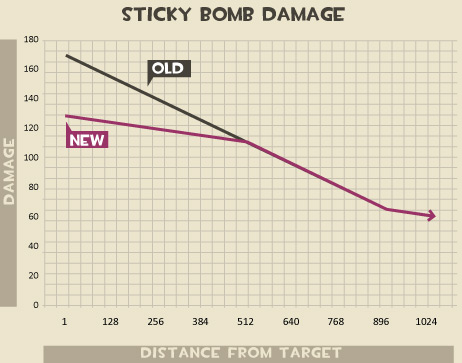 Why did we do this? We didn't think that the Demoman was overpowered at medium & long ranges, where the charge up time provides an existing penalty. If we did a straight damage reduction across the board, we would affect that. In addition, by weakening the Demoman specifically at short range, we've created a weakness that enemies can take advantage of in combat, and makes the Demoman wary of specific enemy classes (like the Scout and Pyro).