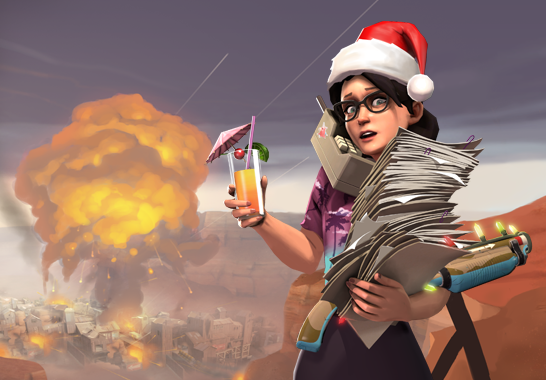 Just like in the classic final scene of A Christmas Carol, when Tiny Tim breaks out of Scrooge's cryogenic storage and unleashes a psychic explosion, Team Fortress is delivering a Smissmas miracle. That's right, Smissmas gifts can now be opened! Also, spoiler on the gift: You'll be getting a Gun Mettle and Tough Break Festivizer. Festivizers let you take your favorite weapons from the campaigns and craft them to your diabolical festive will, just like Tiny Tim when he blasted Ebenezer Scrooge's loanhouse/cryofreeze facility to splinters with his psychokinetic onslaught. Festivizers can be found through January 11th by unlocking a Tough Break Campaign case.

Also! The Mann Co. Store Winter Sale is on! Look for big discounts on lots and lots of items until January 4th.