Finding the Time to Bleed

If you wish to watch this video, you will need to Download the Flash plugin.


Since the release of Meet the Sandvich in August, several people have asked us how something we'd boasted would be "our magnum opus," "over four hours long" and "make Citizen Kane look like something dumb a complete idiot would make," ended up being one un-dramatic minute spent inside a refrigerator.

Now that more than a month has passed and the wounds have healed on Meet the Sandvich, we can finally give you an honest account of this aborted 240-minute epic, and by that we mean point fingers: It was all the bean counters' fault.

"Could you explain to us how your script is in any way different from Predator?" asked one of the suits.

"Where you can hear Predator happening outside of the refrigerator," clarified Jay Pinkerton.

"Right," said a suit, "but only because the script includes the first half of Predator..."

"... then all of Road House, and then the rest of Predator." 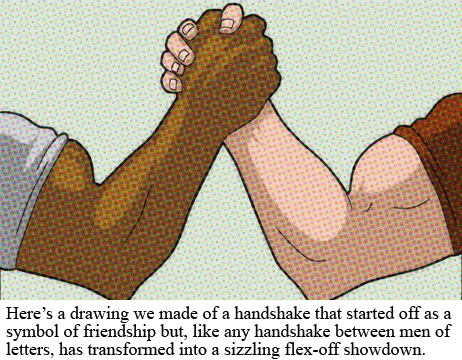 More nods. For a bean counter, this guy had really done his homework. Much like Dutch, when Dillon explains to Dutch how the Predator uses the jungle to its advantage, these suits really "got" it. We let our defenses down.

"Our script is pretty much exactly like Predator," Jay agreed.

"We took the script for Predator and put our names on it," Erik added, in case this hadn't been clear.

"Also, we had to paste the script for Road House there in the middle," Jay said when it suddenly occurred to him that business types who don't understand the creative art of writing might think merely writing your name on the Predator script isn't a full time job for two people. With everyone apparently now on the same page, Jay began working the room and shaking hands.

As it turns out, we'd been led, like the Predator by Dutch, into a trap. Instead of sharpened bamboo and weighted jungle pulleys, though, this was a trap of words, and instead of the Predator, it was us. 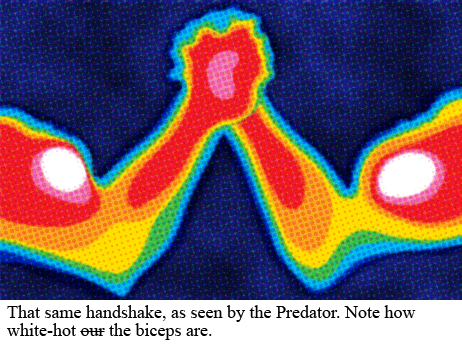 The suits demanded we give them the script so they could shred it. Just like in Predator, Jay doused the script pages in mud to conceal their heat signature from the suits. Unlike in Predator, this did nothing. The script was confiscated and destroyed. This created a small problem for all the Team Fortress actors we had standing around in the recording booth, watching us through the window with increasingly visible agitation.

"Hello?" barked Rick May, the voice of The Soldier. "Are we doing this or not?"

"Oh man, we are going to get fired now," Jay said. "We'll have to get jobs! We'll have to..." Jay tried to think, failed, then gave up in frustration. "What do people who aren't writers do?"

"I think they... sell things," said Erik, clutching at fuzzy images of people he'd walked past on the street on the way to nice restaurants. "Shoes and watches. From behind tables." He remembered his butler, who wasn't a writer. "Oh! Or they serve things."

"What are you two idiots talking about in there?" asked Gary Schwartz, the voice of the Heavy.

Jay grabbed the intercom mic. "Shut up, please," he observed. 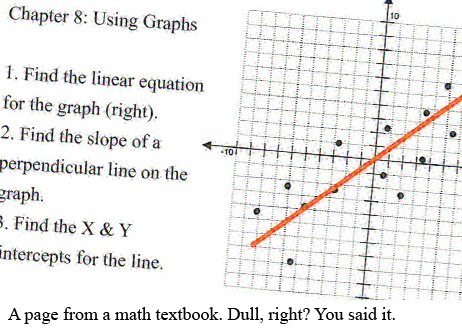 "Anyone else notice this script is basically Predator?" Nathan Vetterlein, the voice of the Scout, asked. "It's not just me, right? This is word for word Predator."

"You think you can do any better?" spat Erik, a cloud of sandwich chunks hitting the sneeze guard they put between actors and writers in professional recording studios.

"You think what we do is easy?" screamed Jay, sending a further cascade of sandwich onto the sneeze guard. "Where would you have put the script for Road House into the script for Predator, smart guy? At the beginning? Because then it's just two movies," he said, not even believing how stupid someone could be to do that. He put his sandwich down to better illustrate the point with his hands, using his open palms to signify two different scripts, then bapping them together to further illustrate how stupid that would be.

Just as Jay's sandwich hit the table, a light went on in the refrigerator in Erik's head. "Sandwich... Sandwich! Say..." He punched the intercom. "Hey, guys? This is gonna sound crazy, but I have a new direction I want to try. Who's seen the movie Predator?"

"I have!" Jay exclaimed, thrusting his hand into the air.

Erik began to pace. "We open on a chopper. Inside sits Dutch, muscles bulging thr—" 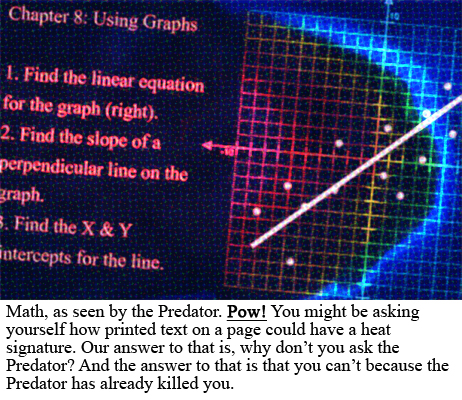 "Look," Rick May interrupted, "how about we just improvise something?"

"Improvise..." Erik said, stretching the "s" out thoughtfully while staring at the ceiling.

After a minute of Erik saying "sss" followed by a gasping gulp of air followed by a few minutes of silence, Rick May tapped on the glass and asked us if we wanted him to tell us what "improvise" means.

It turns out "improvise" is another word for "the writers just watch," which sounded good to us. Better yet, the improvising was a big success, and led to the dialog you heard in Meet the Sandvich: rude, raw and spontaneous, like freestyle rap (or, as Valve writer/amateur freestyle rap impresario Marc Laidlaw refers to it, the poetry of the streets.) Here's a sampling below of some of the stuff we didn't end up using:

"We got him by the short and friskies!"

"You're writing checks your butt will find uncashable!"

"You call that killing me?"

"Half the blood in your body!"

After an hour of high quality stuff like the dialog above, the writers had gained enough confidence to improvise some of our own. Here's a line we improvised ourselves from the movie Predator:

Here's a line we improvised that almost did make it into Meet the Sandvich, and was only removed after a non-writer dropped by our office and pointed out that we hadn't actually written it per se, and in fact had stolen it outright from The Simpsons:

The point for all you young writers is just this: if the constraints of your current project don't specifically forbid it, your best writing will always result from writing your name on the Predator script. If, for whatever stupid reason, this isn't an option, improvise. Improvised dialog feels more real because it's lived. More importantly, it requires no actual writing.