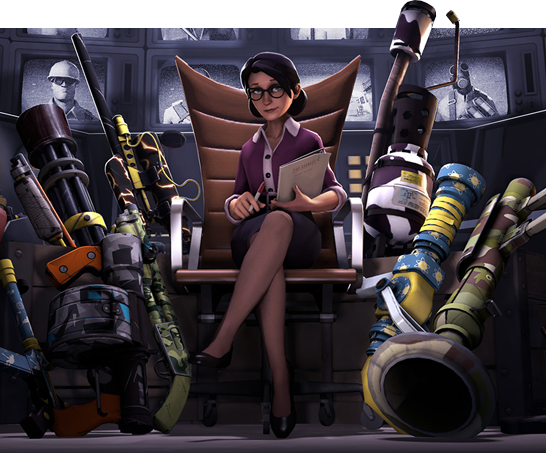 What's the point of having a cool gun if everyone else has one too? You know who has guns that are all alike? The army. And the army isn't fun at all. They barely trade and paint their weapons, they hardly ever give each other presents when one of them does a really good job, and their weapons don't even have kill-counters or sparkle effects. It's almost a job.

Introducing the Gun Mettle Campaign, new to TF2 and releasing tomorrow, which succeeds in every area where the army fails: Rare guns! Mystery boxes! Skill-based prizes! Buying a $5.99 Campaign Pass lets you test your TF mettle against a series of weekly challenges, and gives you the chance to earn one-of-a-kind weapons to keep or trade with your friends. A portion of the sales from Campaign Passes will go towards our hardworking TF2 community mapmakers. Find out more about the new campaign here, and don't forget to read the comic!

Now, say you're the sort of person who's thinking, "You know what's more exciting to me than the Gun Mettle Campaign? Having six dollars." Don't worry, frugal guy, we've got you covered too! A new Valve map! Three new community maps! Taunts! A new way to equip new weapons in-game for free! Loads of class and weapon changes! Check out the details here. You guys, this is a big update. And it lands tomorrow, so check back.