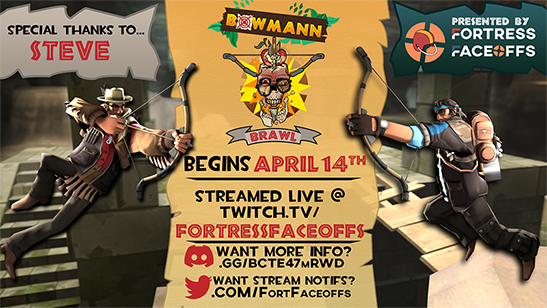 Ready those arms, mates! There's about to be an uprisin'! Sticks and stones will be breaking bones, but words make advertisements cooler! The Fortress Faceoffs team is back with a new event this season to try out some old-fashioned archery! That's right, this action-packed hunter holiday isn't gonna hide much longer! Come participate in the Bowmann Brawl Tournament, featuring teams of five competing against one another to see who's got the sharpest eye and the least impact wounds! Battles will take place across five lovely landscapes designed to test who's the best at "standin' around like a bloody idiot" on the objective! The eight teams of kings who stand highest on the hilltop will move on to the Fortress Faceoffs livestreams to celebrate their glory on the big screen!

Be sure to get in quick! This is the first of many minor events to come! Hosted around April and October, future minor events will be announced only in the Fortress Faceoffs Discord and limited to a smaller player count. This event is restricted to 24 teams for North America and Europe, so be sure to get in and apply before April 6th! The games begin on April 14th! See you there!