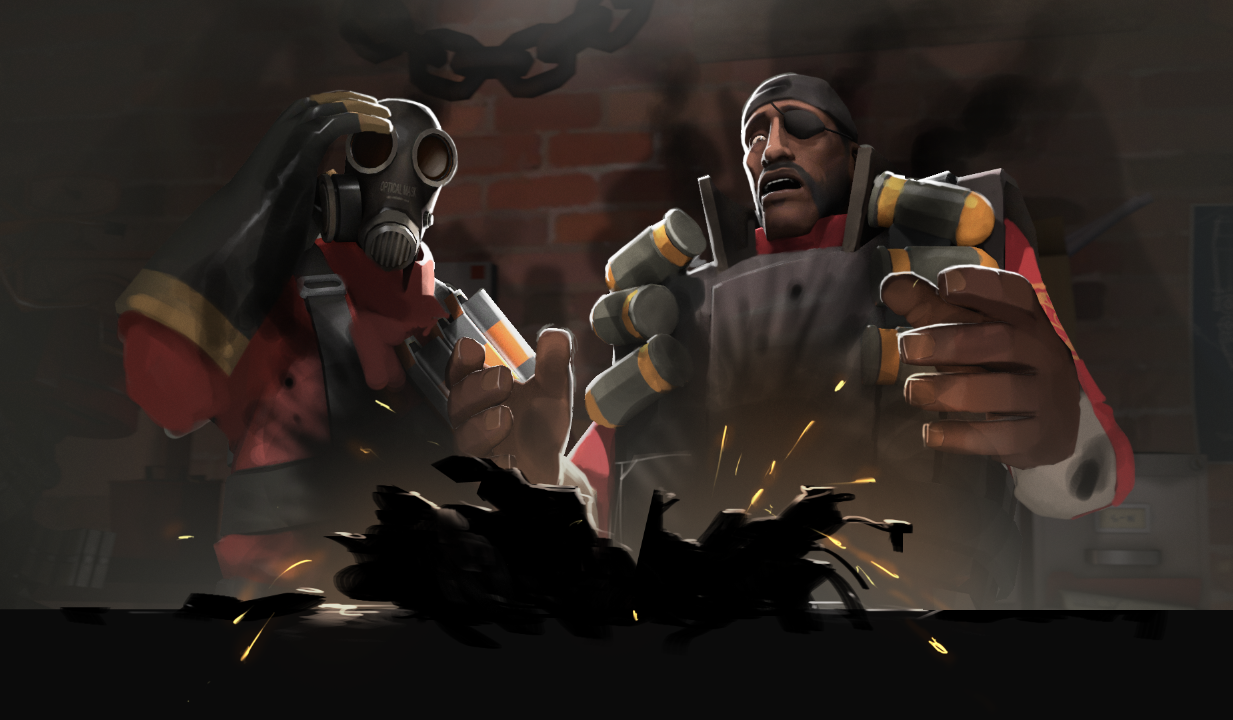 One of the things we've been up to lately is working on new weapons for an upcoming update. And when we iterate on new weapons internally, we tend to make a lot of them. It helps ensure that the weapons we finally ship are as fun and additive to the overall gameplay experience as possible.

But it also means we're usually left with a lot of bad weapons that, for one reason or another, are better left unshipped. So while we keep busy with the latest update, we thought you might get a kick out of some of our absolute worst weapon ideas from past ones.

Any time someone starts thinking of weapon alternatives for the Demoman, one of the first questions is usually "Instead of having a bunch of small sticky bombs, what if he got one big one?"

Unfortunately for everybody else, unilateral area denial usually isn't fun for anyone except the player doing the denial. While there are some weapons that make traversing an area more difficult, they're not so overpowered that they shut down entire areas while removing the ability to respond. Rather, they lead to alternative routes and tactics, giving players an opportunity to "counter" in a variety of creative ways (airblasts, sapping, ubers, etc.).

These opportunities simply weren't available with The Big Bomb. Because it was replacing the existing demo sticky launcher (an incredibly powerful weapon), the Big Bomb also had to be incredibly powerful. Making it powerful enough to deter a team from entering a room meant that either A) as a player you felt stymied with no options, waiting for it to detonate before resuming the fun part of the game; or B) you didn't notice and immediately got exploded. In playtests, neither of these choices wound up being fun for players on either team. This includes the Demoman, who was stuck with a low-skill-ceiling, fire-and-forget weapon that primarily added spam but not value.

Sometimes we're pretty confident right off the bat that an idea is terrible. But if we can quickly make a testable version, sometimes we'll playtest it anyway just to make sure. Even a terrible weapon can turn into something interesting with a little iteration.

The Facestab Knife was not one of those. While brainstorming ideas for the Manno-Technology update, one of our resident Spy players asked the question "What if there was a knife that was almost useless from the back but could backstab from the front?" The video below provides the perfect answer to what would (and did) happen.

The Pyro's Sucker was intended to be the opposite of the airblast, moving enemies closer to the Pyro by applying a steady force over time rather than a one-shot blast. However, on top of the unenjoyable gameplay issues it caused, the Pyro's vacuum-inspired Sucker also had a host of technical issues.

One of the reasons why TF2 works and feels solid even on slower network connections is that every client is constantly predicting its own movement without having to talk to the server. Your player can move forward in real-time on your screen, responding to your input the same way the server eventually will.

Even on fast networks, where prediction plays less of a role, the Sucker was lackluster. It gave the Pyro, a class that's deadly in close quarters, a tool to move anyone into range. We've found that TF2 works best when classes and players support each other, making up for weaknesses and combining into new strengths, rather than giving any one class more and more tools to solve all potential problems.

Mobility is really important in TF2, both during and between engagements. When we saw that community members Sexy Robot and Square had created an amazing Soldier parachute, we started thinking about the options it might open up for that class. Being airborne provides strategic position benefits, but at the cost of maneuverability. Increased movement options against Pyros and Demomen are balanced by increased exposure when fighting Heavies and Snipers.

In playtesting the parachute, we all had a bunch of fun, and at the end of the day that's really what we're hoping for with all of our weapons.

Wait, this isn't a terrible idea at all. Okay, forget that last one.