The 2013 Saxxy Award Nominees Have Been Announced! 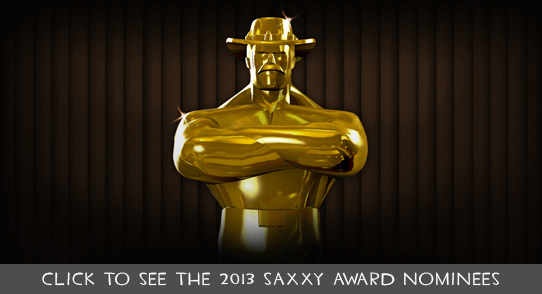 You voted. We counted the votes. More accurately, we watched while a computer programmed to count votes counted all the votes. Then, just when we were thinking it had been a while, and maybe the computer was broken, bam. It spit out a card with the 2013 Saxxy nominees punched into it. Then it spit out confetti. Then it self-destructed from all the pageantry. Then—you know what, there were about thirty-seven more things that happened, but we're looking at them now and most of them involve us trying to fix the vote-counting computer, so let's skip to the part where the nominees are live, at sourcefilmmaker.com, for your viewing pleasure!

We've also posted a list of this year's Honorable Mentions, so give them a look too! Or, if you don't feel like reading, why not wait for the honorable mentioning robot to come to your town and read them to you as part of his cross-country Honor Mentioning tour? Nevermind, he just broke trying to open the door.

Update: The winners are now announced as well, and all entries are now visible.