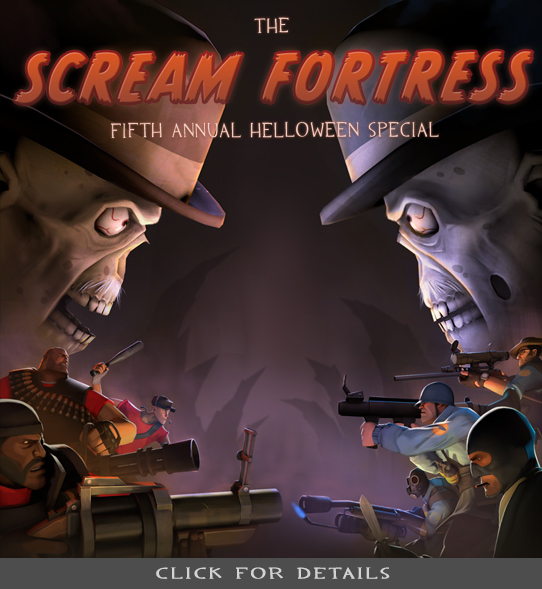 Ahoy, buoys and gulls, it’s almost Docktober 31st, and that means it’s time for the Fifth Annual Team Fortress Tort-urous Halloween Special, which this year is based entirely around the terrifyingly complex legal questions that haunt maritime law. AWOOOOOOOO! [Sound of receiving a jury summons]

And that horrifying description of an obviously terrible idea for a Halloween update — an idea so dreadful that we gave up on it almost fourteen hours ago — was just the FIRST of this year’s many spine-chilling, spine-tingling, all-around spinal cord-injuring shocks. We have one word of advice to those of you who survived our previous four Halloween Specials: Stop lying. These updates will kill you — GUARANTEED! [sound of our lawyers reading that sentence]

This year's Scream Fortress map is Helltower, a Payload Race variation, with at least one major difference: You're all powerful magicians. Everybody gets a spellbook gifted to them automatically, which you can equip in your Action Slot in order to pick up and cast spells. The team that wins the race will be granted a buff for the final climactic battle, where you will fight for the ultimate Halloween reward: Your own lives. And a reward.

So, fear fans, it’s time to put aside your precious laws of the sea, because this year anything can happen. Ghosts? Yes! Forbidden magic? Yes! Skeletons? Oh, yes. A Hellmouth? Obviously. A corpse? Yours. Really? Check your pulse. The murderer? You. Anyway, we’d love to sit here and shock you to death all day, but the update’s live.