Only a Thousand Hours Left Until the Witching Hour! 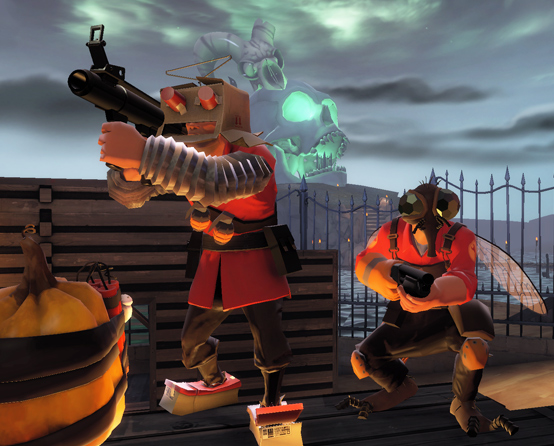 It's just over a month until the scariest day of the year, but you'd never know it by looking at the TF2 Workshop. No, suddenly everybody's too cool to be so scared of Halloween that they're even scared of it 42 days before it happens. Well, gather round the campfire and let us tell you a story about somebody else who thought he wasn't scared of Halloween just because it wasn’t anywhere close to being Halloween. He was at his wife's office building for a Christmas party, and he thought he was in the clear, because that's like ten months away from Halloween, right?

Wrong. A whole team of ghosts took over the Christmas party, and he was caught so unprepared by how incredibly scary they were that his shoes flew off and he hid in an elevator shaft so the ghosts couldn't scare him anymore, but it turned out the ghosts were just after money.

That man was Bruce Willis in the haunted house classic Die Hard, and it should teach you a valuable lesson about showing a little advance respect for Halloween. And you can show that respect by designing and uploading scary workshop items for this year's upcoming Halloween event. We're only going to ship items marked with a "Halloween 2013" tag, so remember to tag your holiday-themed items when you submit them. (You can re-upload old Halloween items that weren't accepted last time and mark them with the "Halloween 2013" tag for reconsideration.)

Also remember that anything you submit with this tag will be restricted to Halloween and Full Moons. And because it's restricted to Halloween and Full Moons, get creative! The tonal restrictions we normally ask our Workshoppers to observe with TF2 items don't really apply to a holiday where wizards and bomb books regularly attack from glowing skull islands, so if there's anything crazy you've been itching to make, now's the time.