You better hold onto your head, mate 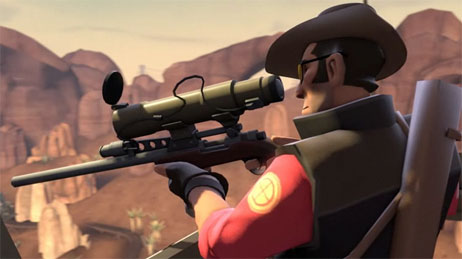 The Sniper has been a tricky class to update. In particular, designing an alternative to the Sniper Rifle has been a challenge. To understand why, we need to go back, way back, into the mists of time, when dinosaurs roamed the earth, and we started working on TF2. If it helps, you can listen to the Doctor Who Theme while you read.

In our multiplayer FPS games, players tend to die a lot. Death is one of the great feedback mechanisms we have in the game, helping you evaluate your own skill versus that of your opponents, and the viability of the tactics being employed by each of you. Being hopeless optimists, we'd like your deaths to be positive experiences. When we started working on TF2, 22 years ago, we decided to examine the things that affected how players felt about their deaths in TFC. Our starting theory was that, for death to be a positive experience, players had to feel like they could have avoided dying if they'd done something different. We found two factors that seemed to be important in light of that theory:


In particular, the second seemed to be the root cause of the hatred of Snipers. You're often killed by them while you're engaged with an enemy in the foreground, and most of the time the Sniper is so far away it feels like you couldn't have dealt with him even if you didn't have enemies nearby. In fact, the Sniper's goal is to create that relationship: he specifically wants to fight enemies outside their engagement range, because that's his primary advantage.

Which brings us back to the Sniper Rifle unlockable. In an effort to reduce some of the aggravation that other players feel towards the Sniper, we chose the goal of designing an unlockable that encouraged the Sniper to get a little closer to his target. We want him to give up some of his primary advantage in return for something else, so that enemies he kills feel like they were engaged with them, and feel like they could have survived if they'd just managed to fight a little better.