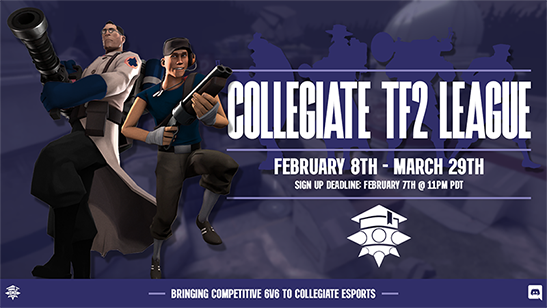 Collegiate TF2 (CTF2) is announcing their upcoming Spring 2023 6v6 League where college students form teams with players from their same collegiate student body to compete against other schools!

CTF2 offers players of any skill level the chance to team up with their peers and compete, with no competitive experience required. From seasoned competitive players to newcomers, all are welcome to compete for their school.

The registration for the Spring Season will be open from January 2nd to February 7th. The season will have teams playing one match per week from February 8th to March 29th, with playoffs in April (TBD based off of the number of teams).

If you're not interested in competing, CTF2 will have other opportunities to be involved through casting matches, production, and general league organization.